Mobarakeh Steel Company started using domestically produced catalysts manufactured by Sarv Oil and Gas Industries Development Company in its direct iron ore reduction plant on Wednesday. According to Mahmoud Rezayi, Sarv’s sales manager, close to 20% of all the sponge iron produced in Iran is with domestically-made catalysts. Khuzestan and Hormozgan steel companies are among other consumers of domestically produced catalysts, the Persian-language newspaper Donya-e-Eqtesad reported. DRI catalyst, one of the main materials required for the production of sponge iron from pellets, was mported from India and Europe for more than 30 years. Domestic demand for the industrial pr

oduct stands at 500,000 liters per year and is expected to rise to 850,000, as new steel mills are established across the country. Iran is currently the world’s biggest DRI producer. It produced 9.1 million tons of DRI during the January-July period, increasing output by 6.1% year-on-year, data by World Steel Association show. The rise was driven by higher crude steel production as the majority of Iranian steelmakers use DRI as feedstock 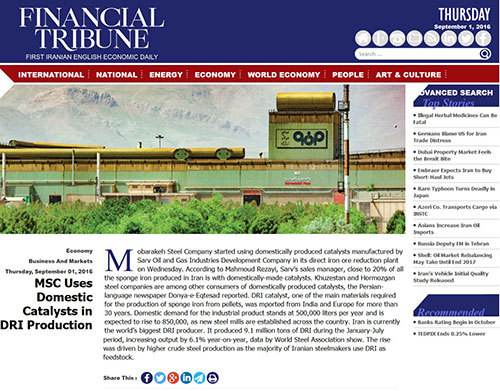