TOGY: Sarv is now a major player and supplier of catalysts to large plants in Iran

?What have been the most important developments for the company over the past year 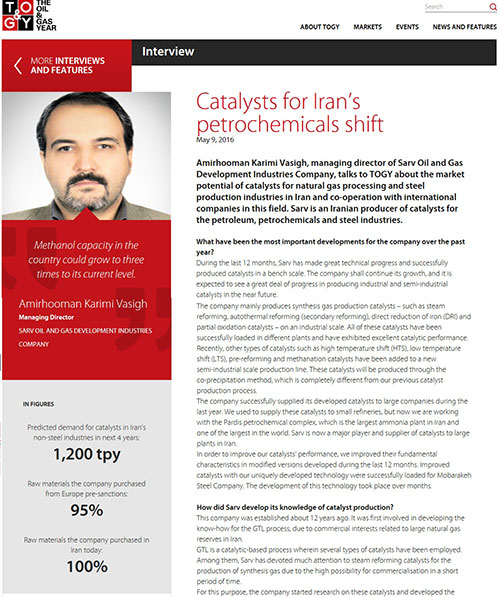 During the last 12 months, Sarv has made great technical progress and successfully produced catalysts in a bench scale. The company shall continue its growth, and it is expected to see a great deal of progress in producing industrial and semi-industrial catalysts in the near future.
The company mainly produces synthesis gas production catalysts – such as steam reforming, autothermal reforming (secondary reforming), direct reduction of iron (DRI) and partial oxidation catalysts – on an industrial scale. All of these catalysts have been successfully loaded in different plants and have exhibited excellent catalytic performance.
Recently, other types of catalysts such as high temperature shift (HTS), low temperature shift (LTS), pre-reforming and methanation catalysts have been added to a new semi-industrial scale production line. These catalysts will be produced through the co-precipitation method, which is completely different from our previous catalyst production process.
The company successfully supplied its developed catalysts to large companies during the last year. We used to supply these catalysts to small refineries, but now we are working with the Pardis petrochemical complex, which is the largest ammonia plant in Iran and one of the largest in the world. Sarv is now a major player and supplier of catalysts to large plants in Iran.
In order to improve our catalysts’ performance, we improved their fundamental characteristics in modified versions developed during the last 12 months. Improved catalysts with our uniquely developed technology were successfully loaded for Mobarakeh Steel Company. The development of this technology took place over months.

How did Sarv develop its knowledge of catalyst production?
This company was established about 12 years ago. It was first involved in developing the know-how for the GTL process, due to commercial interests related to large natural gas reserves in Iran.
GTL is a catalytic-based process wherein several types of catalysts have been employed. Among them, Sarv has devoted much attention to steam reforming catalysts for the production of synthesis gas due to the high possibility for commercialisation in a short period of time.
For this purpose, the company started research on these catalysts and developed the catalyst in laboratory and bench scales. After successful development of the steam reforming catalyst in these scales, the company signed a contract with the National Iranian Oil Refining & Distribution Company for about 200 tonnes of steam reforming catalyst, in 2009.
In order to fulfil the contract, the company had to test the products in an industrial plant. It was placed in pilot studies at the Shiraz petrochemicals complex. After production and loading of 6 tonnes of this catalyst and obtaining the acceptable results, the contract was then executed.
During the development programme, Sarv never asked for technical assistance from any country or any company inside or outside Iran.
Following successful production and loading of the steam reforming catalyst in the Shiraz petrochemical complex, the company has supplied this catalyst to several petroleum companies such as the Arak and Shiraz refining companies, as well as petrochemical companies such as Pardis, Razi, Fanavaran and Shiraz. Furthermore, Mobarakeh and Khuzestan steel complexes have utilised our products.

How have you increased your clients over the years?
Before Sarv started to produce catalysts, there was no experience in catalyst production in Iran. We decided to produce them to attain technology and reach targeted capacities. As the catalysts are also used in steel industries, Mobarakeh Steel Company and Khuzestan Steel Company were among the first companies to use the catalysts supplied by Sarv.
Our clients are basically divided into three groups: refineries, petrochemicals companies and steel companies. Their needs are split into categories such as ammonia plants, methanol and olefins. The sub-categories are the catalysts that these units typically use and the company is also involved in producing all of them. Some of them have been produced for years whereas others have only been produced recently.

Why do you concentrate on producing these catalysts?
There is a high potential for increasing the production capacity of methanol plants in Iran because the country has a lot of natural gas. Methanol capacity in the country could grow to three times to its current level. In addition, there are several ammonia plants and oil refineries in Iran that need the HTS and LTS catalysts, as well as the methanation catalysts.
In addition, the capacity of the refineries will be increased in the near future, which creates an increase in demand for these catalysts. Furthermore, some new ammonia plants will be in service in near future in Iran.

Which is most important in terms of business?
It is expected that demand for reforming catalysts from steel production companies will be about 1,000 tpy, while for other industries it will be about 600 tpy. Therefore, we have to reach a production capacity of 1,600 tpy. It is predicted that demand for catalysts in the non-steel industry will grow to 1,200 tpy within the next four years.
Since the company is in its initial stage of this process, it has decided to cover half of the market demand, so by the end of 2016 we expect to achieve a production capacity of 800 tpy. As Sarv is able to design and manufacture the required machinery, we are certain to reach this production level.

How have sanctions affected your business?
Since the production of catalysts in Iran does not have a long history, the technology has not been transferred from other companies or countries. We had no sources to offer the required technology, machinery or equipment. We were forced to achieve all of our knowledge and technology through trial and error.
During this process, we were also forced to build the required equipment and machinery. The structure of the machinery is quite simple, but the process for producing it is complex. We had to develop and produce it ourselves.
When the country was under complete sanctions, we could not purchase the raw materials needed to produce catalysts from the foreign suppliers. This is because some of these materials could have dual-purpose applications.
Before the sanctions, 95% of the raw materials we used were purchased from Europe. But during the sanctions, 100% of the required raw materials were supplied domestically, and they continue to be. Clients demand a high quality of catalysts as this makes a huge difference to the outcome of petrochemical products. Our clients are ready to pay more for high-quality products.
The high quality of these materials has been confirmed by the technical and quality control department and by statements from clients and competitors. Comments by foreign competitors at the Iran Petrochemical Forum (IPF) held in December 2015 confirmed that the quality of our products was just the same as that of the European catalysts and in some ways even better.
We were also forced to produce the materials ourselves to keep the quality high. If we had purchased them from local companies, the quality would not have been as high.

What potential does your company have for international operations?
At the IPF summit, some companies came to me and said they were already eager to co-operate with our company. There is potential to export our catalysts to other countries. These would be neighbouring or Middle Eastern countries, and maybe even ones in Africa or the Americas.
Iran is well equipped with resources for GTL, so it is an attractive market for this technology.
After discovering the South Pars field, Iran decided to enter into co-operation with Shell to build some related units. This was in 2003, at which time there were no serious sanctions imposed on Iran. Still, other countries decided to deprive Iran of these technologies.
The Pardis complex, as the biggest centre for production of ammonia, was designed to be the biggest centre for GTL production. Even after the engineering for this had all been done in the design, because of sanctions, it did not go ahead.
After that, the Iranian government and private sector decided to domesticate GTL production, so the founder of this company established our operations with the aim of achieving this goal. We also had co-operation with Iranian Mines & Mining Industries Development & Renovation, known as IMIDRO, a company related to Iran’s Ministry of Industry, Mines and Trade.
GTL production was first established on a laboratory scale and then developed into a demo plant with the capacity of one to three barrels per day of finished products. The first aim was to implement the technology and after that there were some steps taken in order to design the industrial units.
Currently, with the decrease in oil prices worldwide, it may not be a good situation to evaluate the financial costs for GTL production. It is better to do this when the price of oil is something higher than USD 50-60.

What sort of international collaborations are you considering?
We are looking into partnerships with some of the global players in the field. They have indicated their interest in such mutually beneficial opportunities, which could increase their presence in the Iranian market while giving us global exposure to niche areas.